For this project, we spoke in many microphones to attempt to determine which one sounds the best on us. One of the purposes of this is to try to save time if we ever go to a recording studio.

In this project, I learned which microphone sounds best with my voice, and learned about how to create effective recordings that sound the best – proximity effect, and the Cardioid circles.

For this project, I created a simple melody with chords, then I put a bassline below it. We also watched a video about bass terms, and we were supposed to incorporate what we learned from the video to the bassline. 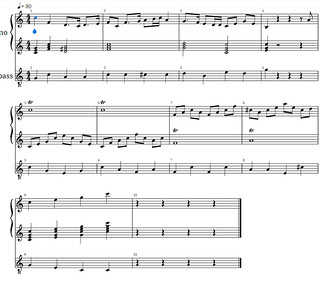 For this, I mostly used either perfect fifths or major thirds with the bassline. I tried to make it so that at the end, the bassline moves in a different direction than the main melody.

Tonality: What makes Western Music sound different than all the others – mostly keys and chords

Tonic: Most important note in a chord

Root: Bottom note of a chord

Double Bass: One of the earliest bass-playing instrument

Bass Tuba: Had the task of playing bass

For this project, I learned how the bassline works, and how important it was. Previously, I thought that the whole bassline was in a strange place. It shouldn’t be too loud so that it distracts from the main melody, and it shouldn’t be too quiet, because then it’s useless. Now, I realize the effect that it has when it isn’t there. It adds a depth to the music, and a wholeness. When I had trouble with this project, I went to this video,

For this project, I created four tracks, with rhythm, melody, harmony, and bass. As this was the final, I wanted to try to make a grand finale, incorporating everything we learned. Unfortunately, I think I only used about 80% of what we learned, for an example, my song definitely wasn’t eight bars, and it didn’t start on the tonic. Also, I didn’t use such techniques like suspension, or dissonance.

Ways of Living in the World

Reflect critically on past experiences in order to inform future progress:

I have used many of the past projects to try to make my final project the best possible I can do. For an example in my final, I used a very appealing beat that I used in my “Making Beats Project.” Also, I used techniques that I learned in the past project, “Harmony Recording Project” – A Major 7th chord that resolves to a Major Fifth right afterward. I also used something that I learned sounded good, which is if I have a trill, with an arpeggio below it, it gives the desired effect of a grand finale. I learned that in Bass Recording Project. 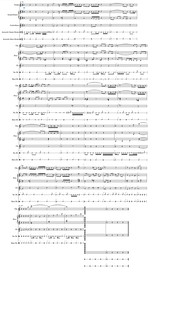 For a better picture of the music, go here

I used a contrabass as the bassline, the violin as the melody, the piano as a mix between the harmony/chords and melody. Mostly, the violin played either the same notes as the piano, or a third/fifth up. I used the snare drum as the more complex rhythm, and the bass drum as the beat backbone. Unfortunately, I was unable to add more melodic techniques such as suspension, and dissonance. However, I was able to add a Major 7th chord, which resolves right afterward. I also added a minor chord. Around measure 19, I added some arpeggios, and at Measure 22, I resolved a perfect fourth into a major third, which gives an effect of resting. Right afterwards, at measure 23-26, the violin does a trill, and the piano plays another arpeggio. I wanted to give the effect of a grand ending. At the very end, all the stringed instruments play a giant C major chord.

Reactions to the Final Version

“I really like how the whole song is like a roller coaster. It is happy at some parts and sad at the others. I also like the variety of instruments used in the piece. They all sound good with each other and don’t compete at all. The end is probably my favorite because of the unexpected beat drop. It really adds a lot to the piece of music. The part of the song that I find the best and sounds the best to me is the beat. The drums in the background add a lot because it supports the song. the[sic] drms[sic] or the beat is the foundation of the whole song and John does a great job of doing that!” –Jake

Evaluation of the Final Version

Some of the feedback that I have received included a note about the last chord – how it was unexpected. I believe that the reason for that was because it was so loud. It was also simple, because of how I made the violin – the main melody – the loudest, and the harmony behind that. I suppose that the meaning of how I wanted to create the song may count as emotional because I wanted the end to make the listener to feel an uplifting grand atmosphere. However, the limitations of the software that I used didn’t help, because it didn’t really allow volume changes.

In this project, I learned how to create a nice ending, that is satisfactory. Also, I figured out how to make a louder sound on the mp3, for the ending chord, I used as many Cs, Es, and Gs as possible – every single one that Flat.io could play, for every instrument. It sounded pretty good.

For this project, we created a rhythm in the background of a melody (a beat), to a small melody. I created mine in Flat.io.

The beat or PULSE in a piece of music is the regular rhythmic pattern. Like the beating of your heart; heartbeat.

The SPEED at which a piece of music is to be played.

The STRESS given to a musical note.

The period of TIME during which a musical note is HELD OUT.

A specific rhythm determined by the NUMBER of beats AND the TIME VALUE assigned to each note.

The musical rhythms in a piece of music that accents a normally WEAK BEAT (off-beat/up-beat).

When the meter of a piece of music consists of TWO BEATS per measure/bar.

When the meter of a piece of music consists of THREE BEATS per measure/bar.

When the meter of a piece of music consists of FOUR BEATS per measure/bar.

A gradual increase of tempo in a section of music.

A gradual decrease of tempo in a section of music.

A flexible tempo in a section of music. 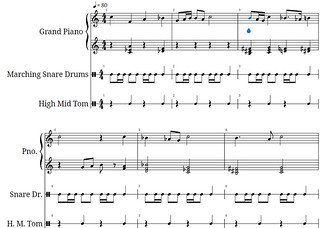 In mine, I remembered back to what my band teacher in Middle School had said about most rock and roll songs, that the beat was accented on the second and fourth beats, and people would clap on those parts. I also enjoy the sound of the eighth -> sixteenth -> sixteenth. I wanted to make sure that most of the strong chords were on the fourth/fifth notes of the snare drum part, and at the last note of that part – the quarter note.

In this project, I learned a lot of terms and more musical theory about beats. Also, I learned by trial and error, that sometimes super-complex rhythms aren’t always the most appeasing to the ear, and just eighth notes sound good.

mirror image of swing in jazz – originated in cuba

Instead, it is anticipating the beat instead of delaying

Cuban dance spread throughout the world

In this project, I created a simple melody, with the length of one period. I then attached a mixture of chords on to most of the notes. Before doing this project, we watched a video about how to make each of these techniques to make the song more interesting, Suspension, Augmentation, diminution, and polyphony.

I tried to structure my harmony by adding some 7th chords, such as at measure 6. I also tried to design it so that it would create tension with 7th chords, then it would release it. An example of that is at measures seven to eight. I tried using suspension at measure seven by carrying the chord underneath the two other notes. I’m not sure how effective it was, though. I tried to carry tension from the two quarter ntoes in measure 4 by using a minor Eb chord, then doing a F chord, to keep the Eb, but turning it to a seventh chord. I resolved it at the note after that, though.

In this project, I learned a lot more about how to make good sounding chords, and how to make chords have more depth, rather than just adding major thirds and perfect fifths. I also learned techniques such as suspension, augmentation, diminution, and polyphony. A problem that I had was it being hard for me to figure out which chords came after eachother. Fortunately, I found a website that told me how to do that, https://www.hooktheory.com/theorytab/common-chord-progressions.

My home was in my middle school math classroom, where I was with people that were closer to my skill level than other groups. It was where I really shone.

In this project, we created a simple melody, over eight measures, or one period. Before doing this, though, we watched a video about how to create a simple melody. We also learned many musical terms. We also found our favorite song on a MIDI file, and downloaded the song on a music program. We then separated the main melody from the background.

One of My Favorite Melodies

For this project, I found a MIDI file of one of my favorite songs, and found it’s main melody line (found up more). I used Unspoken, by Hurts. The main melody starts with an E#, or an F. However, the song is in the key of C.

For this project, we learned more about how to compose a basic eight bar melody. I added some new rhythms to each of the motives – the syncopation in measure 2, the quarter-note triplets in measure three, and the eight-sixteenth-sixteenth in measure 5. The last two measures are a variation of measure four – doubling the length of the notes in measure 7 and 8. The tonic is in measure one and eight to act as a starting point, and a landing point. At the end of measure 4, I put the leading tone in, to build tension. Also at measure five, I put in the dominant to keep the tension. I wrote this in the key of C major.

I learned how easy it is to create a new composition, and I learned how to make a new composition that sounds good. I learned the theory behind each notes, and how to do things such as building tension and releasing tension. One problem I had was I didn’t really know how to change key signatures with Flat.io. Fortunately, I found a tutorial, https://flat.io/support/editor?item=editor.keysig. It showed a step-by-step example of how to solve the problem.

We were given the task of creating a riff out of three notes. For my project, I used the notes of G#, B, and C. I used them because they are what makes the natural minor scale distinguishable from the harmonic. The sound of them makes the atmosphere very different. I wanted to do something pretty simple, but interesting. After getting my basic notes down, I played with the rhythm and order of notes.